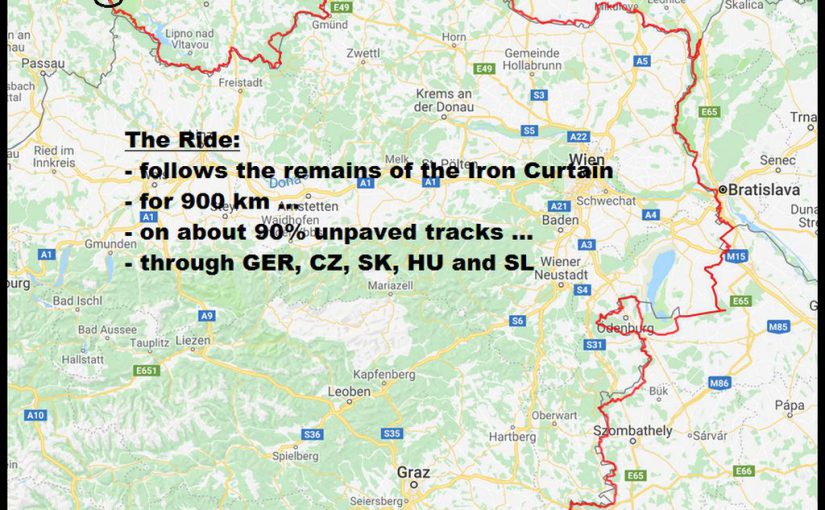 During one of my day rides in 2017 I was following a short part of the Iron Curtain in eastern Austria. There I got the idea that it would be interesting to plan a ride along this former border, which found its end 1989, when the USSR began to fall apart.
So the plan for the Iron Side Ride 2018 was made, which followed the remnants of this former, continent dividing and human made continental breach. Here’s the story behind this undertaking …

After World War II Central Europe was parted and besieged by the winning forces. Time was moving forward and the mistrust between the Western- and Eastern Forces was steadily growing.

As a result the Iron Curtain was installed. First only as a border on the paper. Later, the tensions between the East and the West gained and the border got a nearly an immovable obstacle. Finally, it divided Germany and whole Europe into two political and economical blocks.

In the winter time 2017/18 I worked on my idea. So I began to plan a route. Therefore, I used free satellite footage tools like Google Maps, Satelites.pro, Yandex Maps, Here Maps, Arc Gis and Open Street Maps for finding a proper route through the woods, hills and swamps along the former iron curtain.

As early as I was planning the route, it was obvious that now, nearly thirty years later, the former border patrol tracks where partly overgrown and rotten. Sometimes it wasn’t clear for me, where the curtain exactly was leading, and I added at such places alternative routes to my main route as a backup.

As you can see on this map, the planned route follows the Austrian borderline. The ride started from Vienna to the route-entrance-point in the Bavarian Forest. This point is located near the three country corner between Austria, Czechia and Germany.

From this point, I followed with my black beauty Чернотa the former Iron border, as close as possible eastwards.
This border track led along 900 km or about 560 mi through Czechia, Slovakia and Hungary until we reached another three country corner between Austria, Hungary and Slovenia. There, we left the border strip and rode back to Vienna. That was the plan …

At the End of August 2018 it was time to start this little dual-sport-adventure. Du to some achieved routine in packing all the necessary stuff together, Чернотa …

was quickly settled. The black beauty was hardly waiting for the beginning of this trip. ^_^