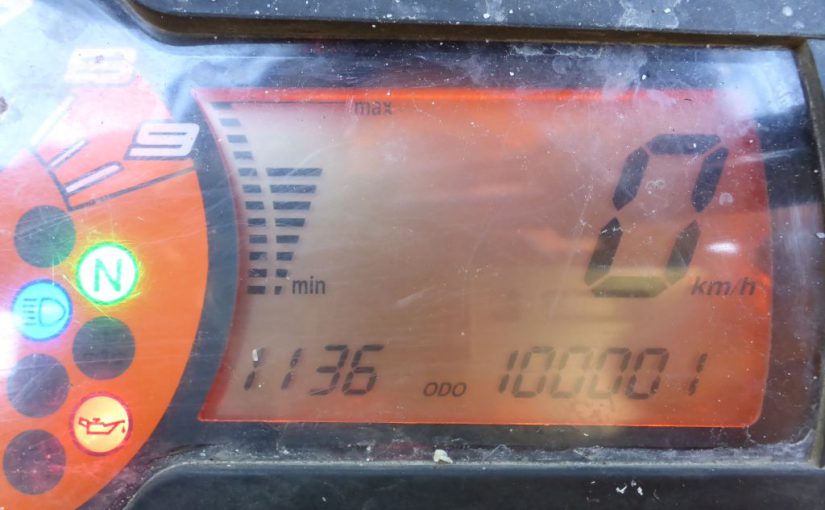 “TRIBUTE TO AN UNDERESTIMATED THUMPER”

Five years ago, when I was looking for a new motorcycle, a web recherche showed me, that there are two main meanings regarding KTM’s 690 Enduro were repeated constantly:

1.) The 690 Enduro is a unique motorcycle without any other serious competitor on the market. Also, it’s a proper platform for building a solid dual-adventure bike out of it.

2.) There are loads of reports and badmouth-rumors out there, which all mentioned the same: The 690ty is a great dual-sport-enduro, but very unreliable and suffers many technical problems.

Especially the second point often was highlighted with usual, sometimes brand- and sometimes type-releated comments like:

“The rocker arms will break and destroy the engine.”

“The plastic sub frame tank will break due to stress!”

Despite some real frightening pictures about destroyed rocker arms vomiting their needles into the engine heart; worn out/shaped crankshaft bearings; heavily scratched cylinder heads and reports about stalling bikes due to defective fuel pumps, I bought my black beauty Чернота (a used KTM 690 Enduro R, MY:2014) in the year 2015 with about 2000 km or 1200 mi on its odometer. Short talk: The 690ty had a few great advantages compared to the other few dual sport bikes out there, which let me negate the risk.

My Чернота got several adventurous modifications at the beginning. The main modifications for addressing the 690ty typical weak spots had been:

After addressing this weak points and adding some other nice stuff to the motorcycle, I started into my little dual sport adventures and showed Чернотa a few nice corners out there. Now, after reaching this mileage-milestone it’s time for a …

In hindsight, now after 100.000 km or 60.000 mi the following parts had been replaced aside the random maintenance work:

As you can see, despite all the bad experiences out there the 690ty seems to be a truly solid adventure bike platform. Especially when the mechanic has an inspecting eye on the weak parts during obligate needed maintenance work. In my case none of the above mentioned bold marked issues led to a total breakdown/stalling of the bike.

Some people may call this luck, I call it proper maintenance work focused on the problems which each motorcycle possesses.

This widely known “unreliable” bike showed well, that it is more solid than as example; my former motorcycle, a Japanese Suzuki DL650 V-Strom was.
(The Suzuki broke down after 35k km or 20k mi with a defective voltage regulator which toasted the battery. There was no way to bring it back to live without foreign help – a tow truck was needed.)

Now it’s time for some serious maintenance. Some parts on Чернотa’s frame like the main steering bearing or the swing arm bearing will be renewed for the first time. I’ll also do some front fork maintenance and its surely time to maintain the rear shock and its leverage too for the very first time ever.

I’m also thinking about doing some work at the engine. Besides the first time swap of the coolant fluid, the result of measuring the combustion of Чернотas heart would be interesting. But actually I don’t think, that an engine-head revision is necessary, because Чернота is still pushing hard out of the corners. I’ll have a closer look to that and will post a maintenance report later.

Autumn and Winter is incoming, so I’ll surely overthink during the cold months some future questions. Especially if I stay with Чернота in the future, or may swap over to a more serious adventure riding solution. As you may know, within the adventure riding scene is a clear trend visible. It is called “Adventure Enduro”. I’ll have an eye on this topic and check the current available bikes/options out there.

With a few impressions of the bike and the traces of wear along this mileage I’ll let this post come to an end:

Worn/scractched heat protectors on the exhaust.

and welded/strengthened tank sub frame e on the left side.

Some boot wear on the clutch cover.

I’m sure: My black beauty Чернотa …

will do a few more miles more, outta there, and …

will be a good companion through a few more other small or big adventures!

All my tribute belongs to this underestimated thumper!

A total write-up about all the modifications done to my 690ty you will find at:
My KTM 690 Enduro R – 2014: Adventure Optimizations and Modifications

Interested in my doings? Then feel free to join my social media channels for further updates! ➡