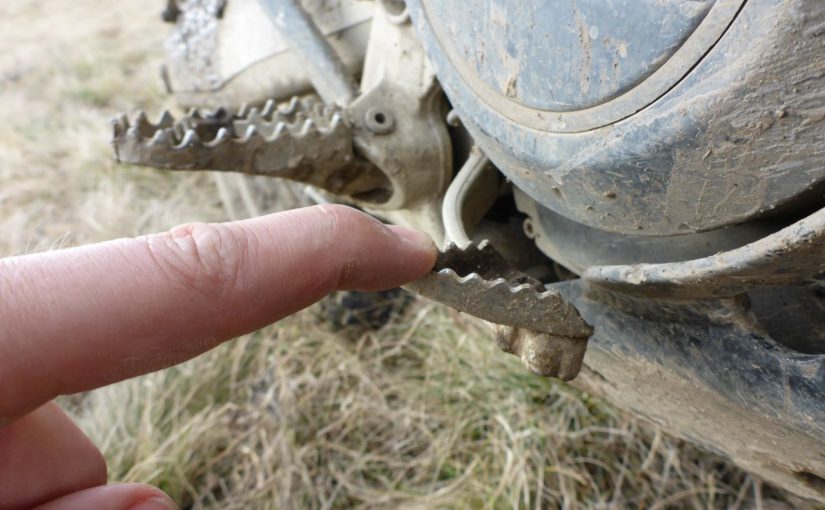 When KTM released the 690ty enduro in the year 2008 it was clear that this bike will be a great platform for adventure-bike-riding. It wasn’t long before until after market manufacturers delivered the first interesting accessories for it.

SO I bought my Чернотa in the year 2015. I’ve searched a lot in the web for useful optimizations regarding this ground solid dual-sport-motorcycle. In the end I came up with a few changes and additions to my black beauty, which fulfilled my needs and made out of a dual-sport-motorcycle a proper adventure-motorcycle.

Here is a summary of all the modifications which I have done to my 690ty:

Overview: Here´s Чернотa recorded from the right, and …

here from the left side.

Let´s start from the most forward modification: The original front fender of the KTM 690 Enduro is quite heavy and it wasn’t available in completely black color. Because of that I switched to total black fender from a KTM EXC Model.

The front fork gaskets get protection from neoprene socks. They are doing their job well. Since owning this bike I never had a leak there.

​For wind and dirt protection I installed the original wind screen from KTM for the 690ty Enduro. First I wasn’t satisfied with it due to heavy air turbulence on the helmet. But …

with a little modification i got that problem sorted out. As you can see here, I used a threaded rod to get a steeper angle of the windscreen. I also drilled some holes for mounting, the  first aid kit in optimal position to the backside of the windscreen.

No adventure-bike without proper protection of your hands and levers! So I mounted this Cycra dirt bike hand guards. They are quite sturdy because of their metal frame (as you can see they already took a lot of abusing). Also they are bigger than other protectors, and so they are helpful when riding in the rain or in the cold against cold fingers.

Here´s a little piece that I really like: An easy to mount throttle grip. On longer rides (+400km or +250mi per day) this little throttle-lever-extension relives the right-hand wrist.

After destroying a few standard  USB-sockets for the handlebar, I finally installed this quick SAE-connector which is providing 12 Volt permanently (picture without the protection cap). When I need to charge a device …

​I use this self-made cable with a socket and a dual USB charger, which is safely stowed in the inner bag of the tank bag. It´s also possible to connect a battery charger directly to the plug at the motorcycle. So there is no need disassembling the bike for getting access to charge the battery.

A dual adventure motorcycle needs good mirrors. Especially when being out in the woods. This mirrors are quick foldable. The joints have different predefined positions, which allow you to unfold them fast again when needed. I don´t like this common ram mount based folding mirrors due to the additional time which it takes to get the mirrors in the right position.

Both passenger footrests have been modified to have a good mounting point for the luggage straps.

The front fuel tanks from Rally Raid are gaining the total fuel capacity from 12 liter to 22 liters. This conforms about a 450-500km or 280-311mi range in total between two fuel stops. The hose between the auxiliary tanks in front and the main tank/sub frame was upgraded with an extra fuel filter to avoid getting dirt from the front tanks into the main tank. The upper and lower tank/subframe bolts have been replaced with heavy duty bolts due to many reports in the web of broken original bolts.

Both front tank breather caps have been modified by myself. I don’t like the big standard breathing hoses. Pressure/ vacuum is able to evacuate via this little red hose from inside the tank into the environment.

The sharp corners of the foot rest placed on the brake lever has been cut down with a grinder. Without that, in case of a fall down, it’s possible that the lever is bend towards the clutch case and the sharp edges will damage the case/in the worst case makes a hole and the trip is over. So cut down these needles corners!

A 88°C fan switch from Rallyraid ( RRP027 ) will keep the KTM-690 cooler while riding under heavy conditions. Normally the fan starts at 102°C which is too high according my opinion.

Here: My solution for a waterproof smartphone navigation device with wireless charging function. Its mounted with some RAM-Accessories to the handle bar. On the bottom right a Voltmeter is installed to monitor the LiPO-battery and the system voltage.

The standard EU-back end was changed with one from the US-market. The license plate itself is mounted on a stroke-resistant Plastic/Aluminium-plate; so it won’t get damaged due to rocks or mud thrown to it from the back wheel. The luggage rack is a light one, made of Aluminium from Touratech.

The indicators are small ones from the company PEAK. I upgraded each of them with a cable tie against losing the transparent glass in heavy terrain (impacting branches, stones, …).

I did the same with the rear reflector on the license plate holder. Two cable ties will prevent a annoying loss of it.

Here behind the left facing you see a support frame for the coolant radiator. On the frame itself is a so called “Push-Button-Oiler” with a bottle as oil reservoir mounted. It’s a mechanical pump from a chainsaw which is triggered manually by myself. It pumps the oil out of the bottle and via a hose, …

leading back to the sprocket. In this way it provides the chain with fresh oil when needed (in street mode each 50km or 30mi a push is enough; off-road, as you can see here no oil is needed). Further information’s to this absolutely credible and simple chain oiling solution you will find here: PUSH BUTTON OILER

​In case of a snapped chain the exposed clutch slave cylinder is protected by an alloy sprocket cover. Currently, I am riding a sprocket from Esjot and a lightweight chain wheel from Supersprox. Both were connected with a 520 VX2 chain from DID.  In my opinion the best chain-compromise between weight and breaking stress for the KTM 690ty.

The side stand plate was upgraded with a broad duck foot for a secure grip. *quakquak*

Under the seat a open air box cover for free breathing and more torque in the lower revs is mounted. There is also a Lithium-Polymer-Iron battery installed which saves about 2kg weight.

The less weighted titanium muffler and titanium manifold are both from Remus. On the muffler a heat shield from Enduristan is mounted to prevent the luggage from heat damage. Due to plenty of dirt often sticking on the top of the rear chain guard I drilled many big holes along the whole length of it, preventing it from getting ripped of due the additional dirt-weight.​

These are the most obvious modifications on my black beauty Чернотa. With this setup I made good experiences out in the adventurous world. Imitation is strictly recommended! ^^