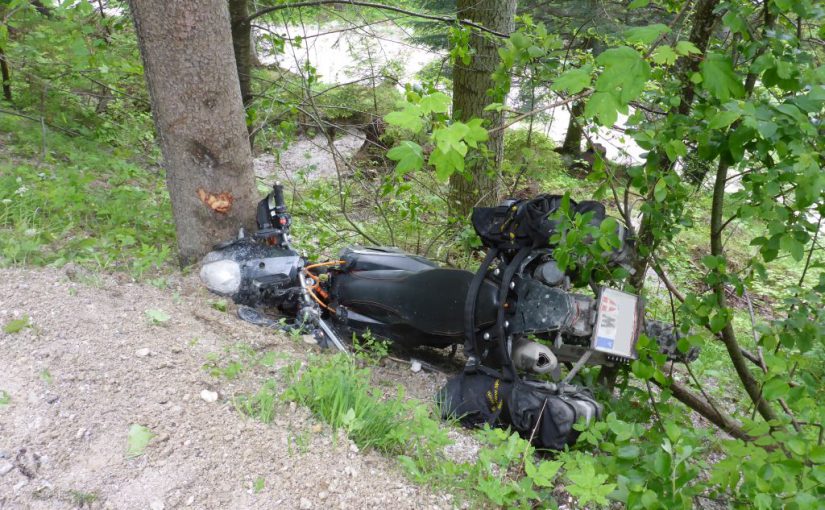 As you know from my last report about the first half of the second day of the Late Spring Ride 2018, my buddy had an accident.
Now the story continues … .

Here on the daily trip map you can see where the accident happened. My buddy and I rode from Austria/Styria to Slovenia. In Slovenia, we intended to follow the Slovenian/Austrian border line mostly on gravel trails westwards, but in the early afternoon my buddy had his accident …

What happened:
While riding a slight bend to the left on a really broad gravel road my buddy had a crash with his 690ty. For unknown reason he left the road on the right side a bit downhill. On this picture you can see, that his 690ty mad a frontal hit of the first, thinner tree in the background. He had plenty of luck, not to hit this thin tree. Instead, he flew about 4 meters / 13ft further towards the camera and hit the thicker tree on the left. His body was wrapped around this tree. Head and feet were hanging downhill. When I arrived at him he was unconscious. He didn’t react to my shouts.
I thought to myself:”SHIT! SHIT! SHIT!” Just at the moment when I began to pull him up the hill for starting the first aid check on the flat road he got conscious and shouted to me that I should stop pulling at him and turn of his still running 690ty.
He had heavy pain in his right wrist. After 5 minutes he was able to move. We slowly got up the steep hill and sat down on the other side of the gravel road. Again and again he was asking about what happened and where his motorcycle is. After I told it to him for the 3rd or 4th time I was sure he had a brain concussion and that he needed surely a ambulance for both, his wrist and his head. First I tried to get a signal with my mobile phone what didn’t work.
Next I turned the mobile phone into flight mode and called the EU-Emergency number 112. With this number the phone automatically dials in ANY available network, regardless which provider is available and its also immaterial if your Sim-card is compatible.
That way I got a weak signal, and gave the dude on the emergency phone, after a short explanation what happened our GPS coordinates, because he wasn’t able to localize us in the border region via the mobile signal. He sent us an ambulance.

While waiting for the ambulance my buddy still was in his slope of thinking. Again and again he was asking the same questions: “What happened? Shit! Why is my wrist hurting? Where is my bike? Is the bike ok? … . In the meanwhile a nice lady was stopping with her car. She brought my friend a blanket and also called her cousin, a farmer living about 5 km away which will help me to get the bike up the hill. The ambulance and also the police arrived after about 45 Minutes. The ambulance took care of my buddy and the police tried with my help to get a plan what happened.

With the help of the police and …​

the above mentioned farmer we have been able to pull the bike the hill upwards. My Buddy drove with the ambulance to the city called “Celje”, which was about 80km or 50mi in the opposite direction of our planned route.
In the meanwhile I was organizing a safe place for Чернотas damaged sister at the farmers house. We changed our personal data for a later pick up of the bike. Very nice people those Slovenians! Thanks again for that! After that …

Чернотa and I also left the place of accident …

and I enjoyed (as far as possible) …

where I found a nice “camp” in the city center. After a quick shower I called my buddy. He was in better conditions so …

I went to the hospital where he was brought by the ambulance.

About 3 hours after the accident, his constitution was much better. A Xray showed that the head of his right spoke bone was smashed into pieces. A CAT-scan showed his head was ok (besides his abnorm KTM fanatism ^^) and he probably suffered a brain concussion which lead into his lost short term memory two hours before. He still didn’t have any clue what happened exactly.
Finally, we got it managed to organize his transport back to Austria. An insurance at the Austrian automobile club OEAMTC is a real good invest for such accidents, and he got the message that he will be brought back to a hospital in Vienna probably on the next day.

After a short walk in the city and my advice, my buddy stayed this night at the hospital in Celje. Just for safety. Damn what a day! I went back to the hotel and slept like a stone … … .