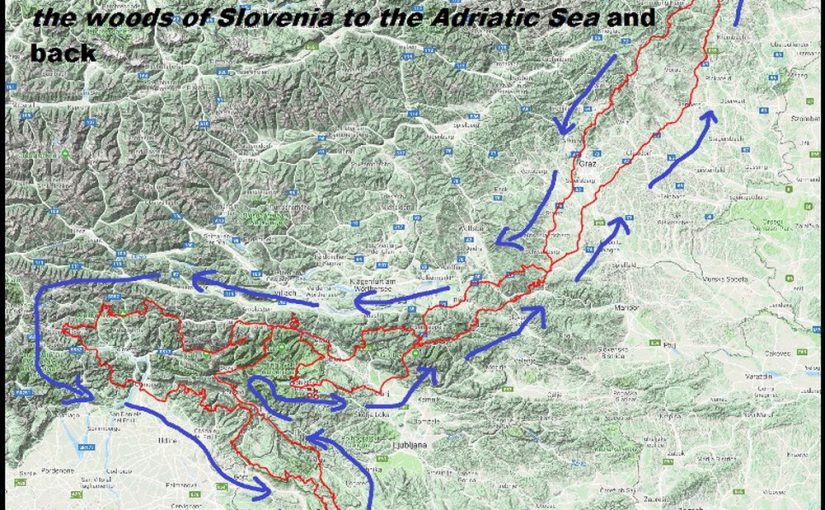 This is the ride report of another short adventure, which a good friend of mine and I undertook in the late spring of the year 2018 with our 690tys.
With the beginning of 2018 I started to plan a new short adventure with its focus within the alpine areas around north-eastern Italy and western Slovenia. Especially the part in Slovenia was interesting due to some parts of the Trans European Trail have been included in this plan. Here’s a short overview of the planned route …

That was the scheduled route in detail: It starts in Vienna along the eastern Alps, further southwest in the direction of the city Graz straight to the Austrian/Slovenian border. From there it follows mostly on the Slovenian side along the borderline further westwards along the Julian Alps on plenty of gravel roads and passes the city Bled and the famous skiing village Kranjska Gora, til north-eastern Italy.
In this area is the famous alpine region called “Friuli” located, where the plan was to ride two of the many high alpine roads left over from world war one.
After that, near the lake Sauris the route turns again back in direction Slovenia. Near the border crossing the route enters the Slovenian TET and and follows it til it reaches the Adriatic shore line. There the route turns back to the direction north and follows some Slovenian back country roads until it passes the Vrsic-Pass-Road, which goes straight through the Triglav mountain massif back to Kranjska Gora. After another short side trip to the eastern part of the Triglav-massif the route follows as straight as possible back through Slovenia and Austria to the city of Vienna. The plan is to arrive after 4 days and 2000km or 1250mi back in Vienna. But as you know: Best laid plans often go awry … .

On 18th May 2018, the day before leaving, everything was packed as always according my packing list. The only new thing so far since my last trip, was a new small tent from Helsport. Exactly it’s a Ringstind 1/2, which weights only about 1,0 kg. In my thinking a masterpiece of tent engineering. More about it in the incoming reports.
​
Everything was packed and Чернотa was impatiently waiting in the garage to be saddled for the soon incoming adventure.